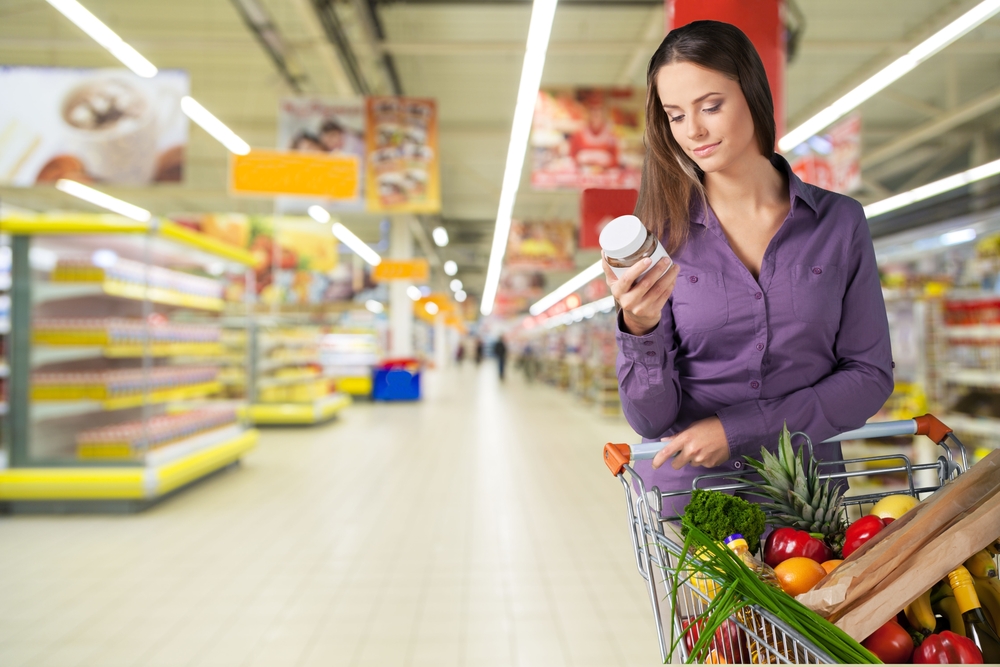 In most markets, the label of each food product must include the nutritional table, which is an indicator of the energy value of the food in relation to its proteins, fats, carbohydrates, fibers, sodium, vitamins and mineral salts.
The nutritional table was optional until 2011 (except products whose marketing claims clearly refer to specific nutritional indications), the nutritional value table became mandatory with the entry into force of EU Regulation no. 1169/2011. Therefore, for packaged food products that are distributed and marketed in a European country and addressed to the final consumer, the nutrition declaration on the label is mandatory. At the same time, again in the EU area, the nutritional table can be attached to the technical data sheets for products intended for the community (e.g., public exercises such as bars, restaurants, hotels, etc.).

The obligation to put the nutrition label on the label does not include “pre-cooked products for direct sale” (e.g. cheese exposed in fridges, wrapped in cellophane with a sticker bearing the brand of the supermarket) and bulk food (such as legumes in the “do-it-yourself” weighing bag); foods supplied to the community are also excluded, but they are subject to mandatory and specific indications of allergenic ingredients.
The exclusion of this obligation also applies to certain categories of products, as described in Annex V to EU Regulation (e.g. flavorings, spices or jelly), micro-packs (whose surface area is less than 25 cm²), and beverages with an alcohol content higher than 1.2% of volume.

The data: which ones and in what order?

In Europe, the nutritional table includes the data derived from laboratory tests or generally accepted data or even data derived from calculations “obtained from (known or actual) average values for the ingredients used”.
The nutritional data are reported as the standard lexicon envisages and must be inserted abiding by an established order and referring to 100 grams or milliliters of product. The order is the following: energy (kJ, kcal), fat, of which saturates, carbohydrate, sugars, protein, salt.

Nutritional table in the world: the rules change in North America

Although food nutritional values remain unchanged, the indications to be put on the label may differ depending on the country where the product is marketed. For this reason, the mere translation of the table is not enough, either because of a possible linguistic and practical non-conformity (it is always necessary to correctly use all regulatory wordings), as well as because of the necessary knowledge of the rules to express and round decimal numbers envisaged in each country. A blatantly clear example is the comparison between the mandatory European nutritional table and the US or Canadian one: three countries, three different approaches and three different regulations to provide nutritional values to consumers.

In the USA, on July 26, a legislation modifying the rules to draw up a correct nutritional table came into force: producers can rearrange their nutritional tables until July 26, 2018 or 2019 (if they sell less than $ 10 million in food per year). The differences with previous legislation are remarkable, but the main ones concern table graphics, nutrients update based on new scientific evidence and updates of serving sizes and nutritional labeling requirements for certain formats.

The following is a comparative image of a label before and after the new rule. The image was published on the official FDA website. 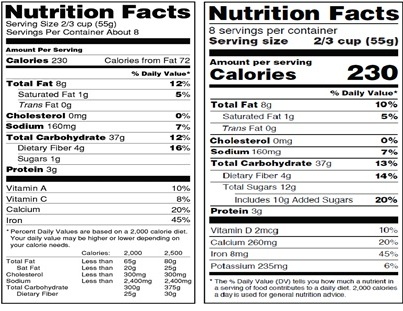 Here you can find a comparison picture of a label before and after the new legislation, published on FDA website.

On December 14, the Canadian Ministry of Health announced some amendments to the Food and Drug Regulations to make the nutritional table and the ingredients list of pre-packaged foods easy to understand. The main changes aim at making the comparison of similar portions easier and more realistic so as to reflect the quantities taken in a meal. At the same time, the new table also aims at making the finding and reading of information on portions and calories easier and reviewing daily percentages according to up-to-date scientific data.

An example of the modified Canadian nutrition table: 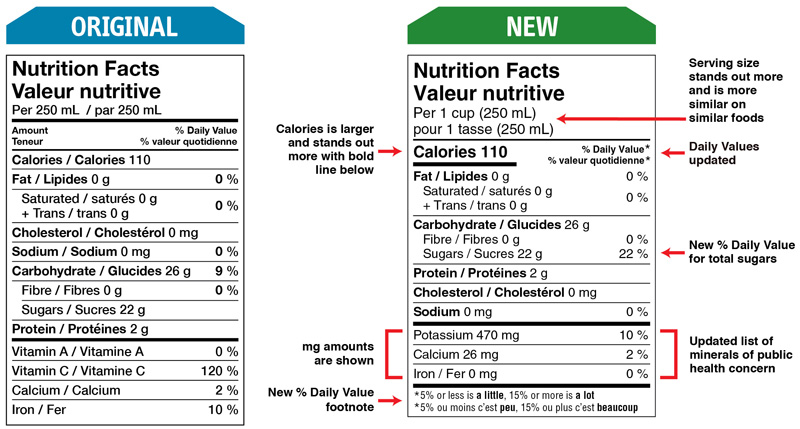 Here you can find a comparison picture of a label before and after the new legislation; it was published on the website of the Canadian Government (Government of Canada website).

In Canada, manufacturers will have five years to update their labels and eliminate those which were prepared according to previous legislation: new labels become mandatory on December 14, 2021.

The Mérieux NutriSciences Labeling and Regulatory Dept. creates the nutritional table in more than 60 countries. The Scientific Dept. is supported by the international network of experts and is constantly updated on international legislations and Guidelines that can be applied in any country (rules on rounding, allowed wordings, graphics). Learn more about our services on the nutritional table or contact us for more information.